I love Bruce Springsteen’s new album since the first time I listened to it, when it was released this spring. “Western Stars” is maybe somewhat singular in Springsteen’s career, because it’s not a rock n’ roll album, but it’s not a surprise for those who loved his album “We Shall Overcome: The Seeger Sessions“, released in 2006. In the same way as the Boss had made an incursion into folk music, adapting and performing traditional songs for “The Seeger Sessions“, he decided to make a record that is not a rock n’ roll album and that is widely open to other genres, including country music. 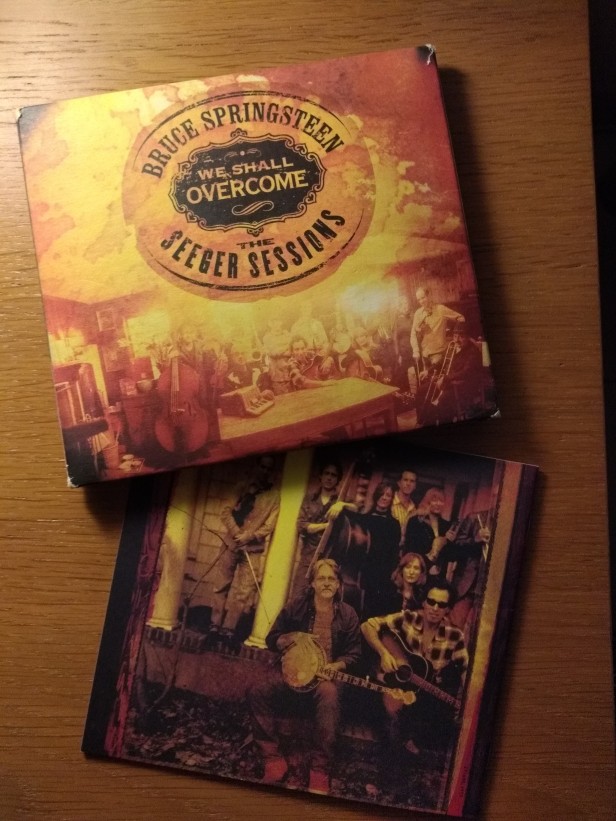 So, while I was in Paris, this week, I went to the movie theater to watch the movie inspired by the album, for its special one-day release in France. Directed by Bruce Springsteen and Thom Zimny, it was filmed in an old barn of New Jersey, that belongs to the artist, and in Californian desert. While the concert takes places in the upper part of the barn, the desert is where the artist is putting into words his thouhts while travelling by car or being with his horse.

In the barn, Bruce Springsteen performs all the songs of his new album, accompanied by more than 30 musicians and by his wife, Patti Scialfa. We can listen to a lot of fiddle, in all the songs, but also piano, accordion for the catchy “Sleepy Joe’s cafe“, and pedal steel for several songs, particularly “Western Stars” and for the beautiful “Chasin’ Wild Horses“. We have a moving performance of “There Goes My Miracle” and also a very good surprise with an amazing cover of “Rhinestone Cowboy” (the song was not included in the album). If Bruce Springsteen showed his love for folk songs with “The Seeger Sessions“, “Western Stars” is undoubtedly the most important path that made the Boss towards country music.

The Californian part is also very interesting. Bruce Springsteen explains the making of “Western Stars” and details the songwriting and the meaning of each song. He talks about his life, his career, his fears, what makes him happy and about the most important: the miracle of love. In the middle of the desert, with beautiful landscape perfectly filmed, he also talks about his country and gives his vision of both sides of America: the individual freedom and the importance of the community and of the family.

If you couldn’t watch “Western Stars” at the movie theater, I recommend you to watch it on DVD when it will be released. You won’t be disappointed: it’s a brilliant and beautiful movie.

She tragically passed away 25 years ago. But she'll be forever in our hearts. Texas Queen Selena Quintanilla, we miss you! 🎶 #SelenaQuintanilla #SelenaForever #Selena25 #Texas #Tejano
I'm heartbroken. No words. Such tragic news for my country music family. Thoughts and prayers for his family and all those affected by the loss of this legend. It's a very sad day for Country Music Rest in peace Joe Diffie. 🙏 You will be forever in our hearts. #JoeDiffie #RIPJoeDiffie #CountryMusic
Listening to Jesse Daniel 's amazing album, "RollinOn", while home training. Be safe, y'all. Stay at home... and listen to a lot of good Country Music 🎶🚴 #JesseDaniel #RollinOn #HomeTraining #BeSafe #StayAtHome #Quarantine #CountryMusic #JodiLyford #TommyDetamore
I reviewed Robynn Shayne's amazing new album, "Let's get this show on the road". Check it out on my blog. Link in bio. 🎶 #RobynnShayne #CountryMusic #TexasCountry #NewRelease #AlbumReview
Tonight, in France, I'm on quaranTVine: James Mangold's "Walk The Line" and Johnny Cash's "A concert behind prison walls" will be successively on TV. Thank you, @artefr, for this Johnny Cash's night! 🎶 #JohnnyCash #WalkTheLine #BehindPrisonWalls #LindaRonstadt #RoyClark #CountryMusic
I'm shocked and very sad, today. A legend of country music passed away. "The Gambler" was 81 years old. Rest in peace, Kenny Rogers. We'll miss you. Prayers and thoughts for his family. 🙏 #KennyRogers #CountryMusic #ripkenny💔