2019 was a year particularly outstanding for country music genre. Choosing the 10 best LP albums of the year has never ben so difficult. I thought a lot about it and till the last moment, I made changes. If I had a clear list of at least 30 or 40 brilliant albums in my mind, choose 10 among them has been a heartbreak. That’s why I want to name, first, some 25 awesome albums that aren’t part of the Top 10 but that I love and that also made my year. I strongly recommend you to listen to them, if you haven’t done it yet.  Those 25 LP albums, some of them I reviewed on the blog, are named below without specific order. They could have been easily part of the Top 10 a “normal” year.

Now, the Top 10. Of course, it’s a personal list based on my subjective views. You can comment below, on this blog, or on my social networks (Twitter, Instagram or my Facebook page) and share your personal preferences. All comments are always welcome! As promised, I’ll also promptly share a Top 10 EP’s, a Top 30 songs and reveal my artist of the year.

This album was awaited and it was worth the wait. Finally released in November, its 10 songs are awesome. Roger Creager and Kevin Fowler had definitely an excellent idea when they decided to make this album during a trip to Mexico. Since it was released, I enjoyed it a lot. “Purdy Dang Bueno“, “Drunk Again“, “Salt” or “Barroom Buddies” are awesome songs, that briliantly blend Mexican music and Texas Country. TexMex at its best! Excellente trabajo, muchachos!

A lot has been said about Midland’s sophomore album. For me, it’s great music and a lot of excellent songs with a traditional style. You love Midland or not, but what’s clear is the fact their music is really awesome. Without “Playboys“, “Mr Lonely“, “Cheatin’ songs“, “Put the hurt on me“, “I love you, Goodbye” or “Fourteen Gears“, 2019 wouldn’t have been the same. And it’s great knowing that I will be able to go to thir gig in London this 2020!

#8 – Reba McEntire – Stronger than the truth

Reba McEntire is among those few artists, along with Dolly Parton, Hank Williams or Waylon Jennings,  who can be called only using their first name. “Stronger than the truth” is a brilliant album, probably one the best Reba has made. It’s beautifully written and very traditional, with some amazing and unforgettable songs like “Cactus in a Coffee Can“, “No U in Oklahoma” or “The Bar’s Gettin Lower“.

It’s the second consecutive year that I have a Dallas Moore album on my Top 10, as “Mr Honky Tonk” was #8 in 2018. With the beautiful “Everything But You” (don’t miss its excellent music video!), the excellent covers of Creedence Clearwater Revival (“Lodi“) and Hoyt Axton (“Della and the dealer“) or “Mama and Daddy“, a beautiful tribute to his parents, the new album of the Ohio-native artist is undoubtedly one of the best released this year.

Ags Connolly is the only British artist present on this post. This singer and songwriter from Oxfordshire, England, is a traditional country artist. Listening to him, you could easily think he’s from Texas, because his music is a typical Texas country sound. “Wrong Again” is brilliant, pure and traditional country music. If you haven’t listened to it yet, don’t wait more!

I was particularly impressed by “Long Time Comin‘”. Micky & The Motocars’ new album, released on November 1st, is brilliant and various of its songs are among the best I’ve listened to this year, like “Road To You“, “Rodeo Girl” or the beautiful and impressive “Lions of Kandahar“.

Released one week before the albums of Mike and The Moonpies and Tyler Childers, “Western Gold” could have been eclipsed by them. For me, it wasn’t, due to its high artistic qualities and its pure and traditional country sound. Gethen Jenkins released a beautiful album, that I could have easily chosen as number one another year than 2019. I love all its songs, that I had on repeat since July. “Heartache Time“, “Whiskey Bound“, “Western Gold“, “Strenght of a Woman” or “Maintenance Man” are all amazing songs. This album is a gem!

This debut album is very impressive. I loved it since the first time I listened to it and its songs are a very big part of my year. Ben Jarrell, from Alabama, is an artist you absolutely need to know if you like excellent songwriting and awesome music. The impressive “Black helicopter“, “Gearjammer Blues“, “Big Iron Train” “Troubled Times in a Tribal Town” or “Highway Whine” are all amazing and outstanding songs.

#2 – Mike and the Moonpies – Cheap Silver and Solid Country Gold 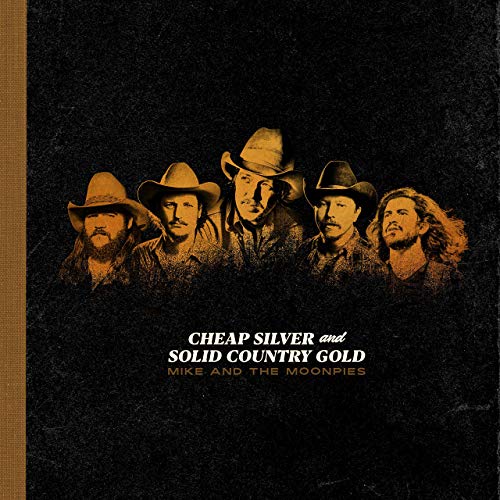 A Mike and The Moonpies’ album is again among my two favorite albums of the year, after “Steak Night at The Prairie Rose” having been also #2 in 2018. This album, produced by Adam Odor, as was its predecessor, was the biggest surprise of the year. Released the same day than Tyler Childer’s “Country Squire“, one of the most awaited albums of the year, it almost achieved to eclipse it. Inluding various gems, like “If you want a fool around“, “You look good in neon” or this impressive cover of Gary P. Nunn’s “London Homesick Blues“, this album recorded at Abbey Road Studios, with the London Philarmonic Orechestra, is a masterpiece.

First, let me say that I chose to gather together the two albums released by Cody Jinks this year. “The Wanting” was released just one week after “After The Fire” and I consider they’re part of the same artistic project. It could have been a double album of 22 songs. And what songs! When listening to those two albums (more than 1h15 of awesome music!), you forget all that is around you and there’s only one important thing on Earth: music. I could talk a long time about the songwriting, the instruments, the impressive quality of all those songs. But it’s better tell you to listen and listen again “William and Wanda“, “When Even Angels Fear to Fly“, “Same Kind of Crazy as me“, “One good decision“, “Whiskey“, “Think like you think” and all the other gems included inside these two wonderful albums.